As semiconductor packages in electronic devices become highly integrated, countermeasures against heat generation have become essential. The most common means of thermal management is to transfer heat to heat dissipators, such as heat spreaders and heat sinks. A TIM (Thermal Interface Material) is essential to efficiently transfer the heat generated by semiconductor chips.

When using or selecting a TIM, basic knowledge of thermal characteristics is necessary. In this section, thermal conductivity and thermal impedance are explained, and then the TIM types and their workability are introduced. 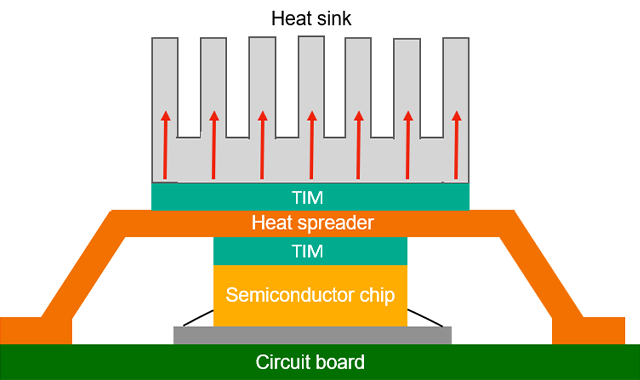 If a heating element is in direct contact with a heat dissipator, even though at the macro level it appears to be in contact, at the micro level there will be an air gap at the interface due to fine surface irregularities. Since air gaps have very low thermal conductivity, heat from the heating element is transferred only at the points where there is no air gap, resulting in inefficient heat dissipation. To solve this problem, TIM must be used to fill the air gap and efficiently transmit heat.

TIM should be selected by considering the material and surface shape of the heating element and the heat dissipator, and by focusing not only on the thermal conductivity characteristics but also on flexibility and workability.

The first thing to focus on in TIM selection is the thermal properties related to heat transmission. An understanding of thermal conductivity and thermal impedance is essential.

Heat can only be transferred from areas with higher temperatures to areas with lower temperatures by conduction, convection, or radiation, and not the other way around (second law of thermodynamics). The thermal energy transferred through a material can be calculated using Fourier's equation.

When thermal conductivity is constant, thermal resistance depends on the thickness of the material and the area of heat transfer where the materials are in contact with each other. 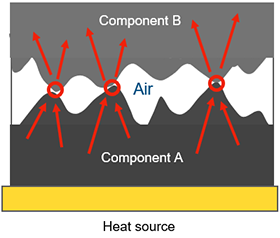 Thermal analysis and evaluation are necessary for TIM selection

To reduce thermal resistance at the contact interface, TIM must have high thermal conductivity in the thickness direction as well as the flexibility to fill air gaps.

The heat transfer coefficient cannot be converted to thermal impedance. Also, thermal impedance varies depending on the state of fine irregularities at the interface. Actual equipment evaluation and simulation are indispensable for thermal management using TIM.

In mass production, the use of TIMs to reduce thermal impedance requires not only thermal conduction performance, but also the ability to minimize variation during TIM installation and fill irregularities on the attachment surface. For this purpose, workability during TIM mounting is also important. This section introduces the TIM types and their workability.

There are various types of TIM as shown in the table below, and the appropriate one should be selected according to the usage conditions.

TIM has different workability depending on the product type. Also, if air gap removal is incomplete due to variations during TIM mounting, the thermal management may not be as effective as expected for the thermal conductivity.

Thermal grease, for example, has the advantage of high fluidity and easy thinning, but has the disadvantage of difficulty in applying evenly and poor workability. Thermally conductive sheets are excellent for use in areas with large steps and have high re-workability, but their relatively high hardness makes them ineffective for thermal management if the compression force is insufficient. Thus, the workability of TIM varies depending on the material, which affects the effectiveness of thermal management after mounting.

In addition, TIM materials may pump-out due to the heat cycle at the location of use, or dry out due to continuous use. Therefore, it is essential to evaluate TIM materials, including their workability, before use.