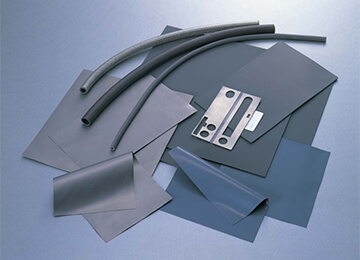 In modern life, radio waves are used in a variety of devices and are indispensable. Cell phones, wireless LAN, contactless IC card readers, GPS, ETC systems, in-vehicle radar, and many other devices that utilize radio waves (electromagnetic waves with a frequency of 3 THz or lower) are all around us.

The radio wave absorber MICROSOBER® provides a clean electromagnetic environment in a variety of situations, from small electronic devices to building structures.

Waves have the property of canceling each other out due to phase shift. This property is used in radio wave absorption by reflection loss. Radio waves propagating in the air are reflected when they hit a reflective material such as metal. Placing a material of arbitrary thickness (dielectric or magnetic) with an arbitrary dielectric constant and magnetic permeability in front of the reflective material generates a reflected wave at the boundary between the air and the material, and a reflected wave generated when propagating through the material to the metal. The two reflected waves cancel each other due to phase differences, resulting in attenuation and radio wave absorption. 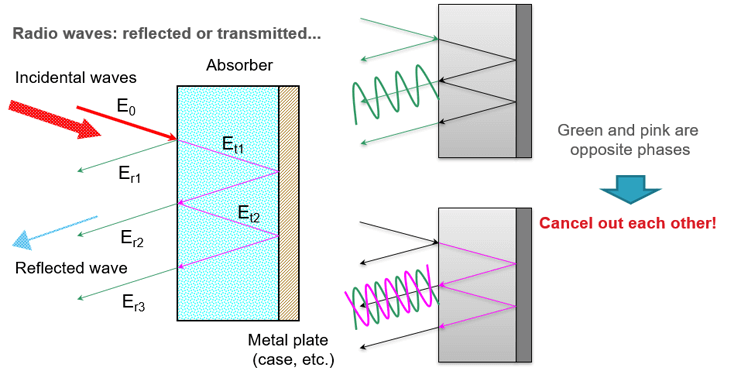 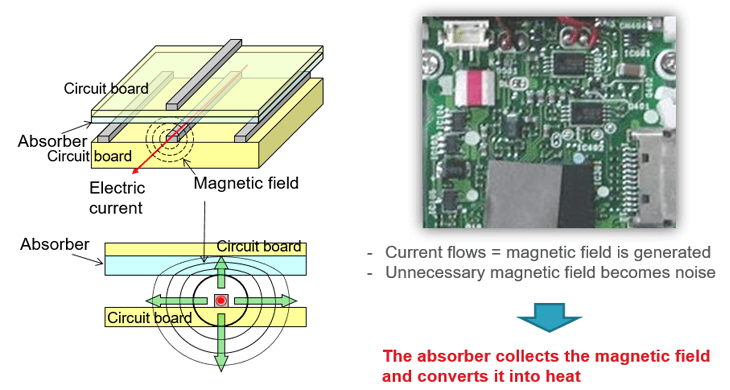 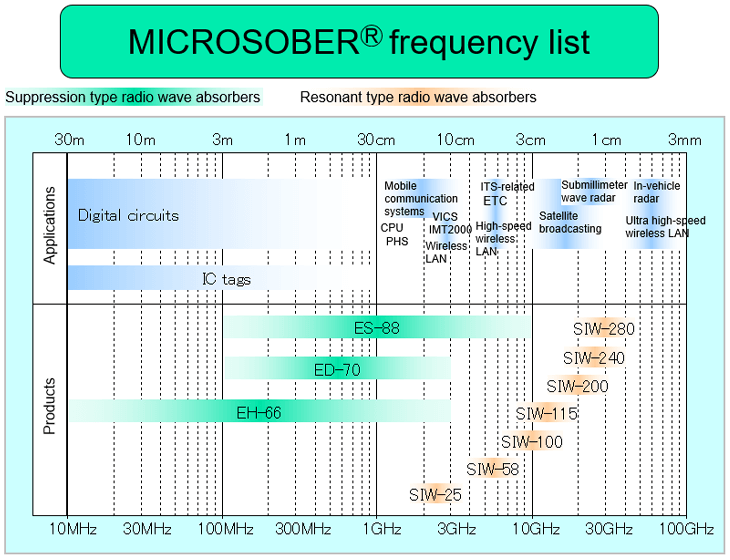 These are sheet-type radio wave absorbers that can be used to absorb specific frequencies, from reducing unwanted radiation in small converters to suppressing reflection from structures. They can be used in applications such as in-vehicle radar and ETC gates, where radio waves in a specific frequency band are transmitted and received at a distance. They are flexible for easy handling, flame-retardant (UL94V-0 certified), and RoHS compliant.

These absorbers are sheet-type and flexible for easy handling, and are RoHS and halogen-free compliant. They are used in cell phones, mobile electronic devices, PCs, game consoles, etc.

Radio wave absorber MICROSOBER® can be widely used in various devices that use radio waves and electronic equipment that requires noise suppression. We can also provide interference and noise countermeasures for various devices according to their frequency bands, such as products for next-generation high-speed communication devices that use higher frequency radio waves and products for wireless communication devices using RFID tags.

Applications for 5G base stations

In 5G (3.7 GHz, 4.5 GHz, 28 GHz) base stations, there are antennas and transmitting/receiving devices, and the area around the antennas requires measures against unwanted radiation and improvement of directivity, while transmitting/receiving devices may require measures against unwanted radiation and noise. Depending on the application and frequency, reflection attenuation type and interference/resonance suppression type radio wave absorbers can be used.

The 13.56 MHz band RFID system is sensitive to metal, and the presence of metal in the vicinity of the R/W and tag cancels out the power required for communication and the magnetic flux carrying the signal. This significantly reduces the communication distance. In addition, if the tag is directly attached to a metal object, communication will not be possible. Radio wave absorbers are a possible solution to this problem. By attaching a radio wave absorber between the tag and the metal, the magnetic flux flows from the inside of the sheet to the outside before it is affected by the metal, thus reducing the cancellation and restoring or improving the communication distance. 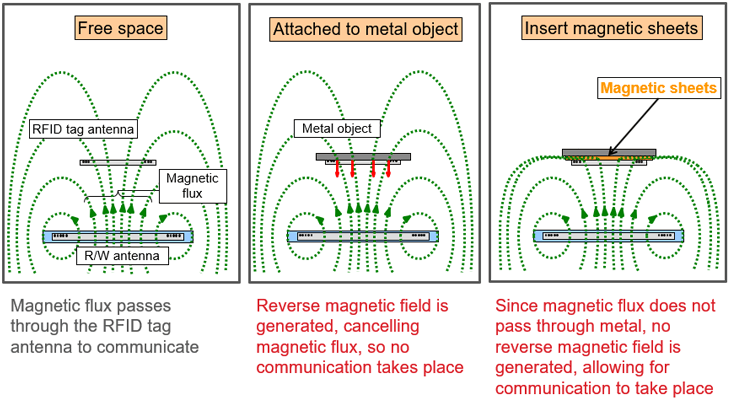 Stable use of radio waves in clean electromagnetic environments

Research has already begun on 6G, the next generation of communications, which will be even faster than 5G and use higher frequencies, from millimeter waves to terahertz waves. In addition, with the spread of IoT devices, devices equipped with wireless communication functions have become commonplace. To help ensure stable operation of these devices, countermeasures against unwanted noise may be required, and some of them may need to be improved by using radio wave absorbers. MICROSOBER® will contribute to the stable use of radio waves by providing clean electromagnetic environments for the next generation of more sophisticated communication and electronic devices in an increasingly diverse radio wave environment.