Basics of EMI Countermeasure | Principles and Types of EMI Shielding

As the technology level of wireless communication devices such as 5G increases, factories and other production sites, as well as society in general, are becoming increasingly IoT-oriented. Electronic control mechanisms are becoming more diverse and complex, as exemplified by the electrification of automobiles.

As electrical and electronic devices continue to become smaller and more sophisticated, electromagnetic waves of various frequencies can interfere with them. This can cause communication problems and device malfunctions that not only prevent the devices from performing to their fullest, but also pose the risk of causing serious accidents. EMI countermeasures are essential to prevent these negative effects of the diffusion of electromagnetic wave noise.

Here, we explain the basics of EMI and the principles and types of EMI shielding, one of the most important EMI countermeasures.

What are electromagnetic waves? 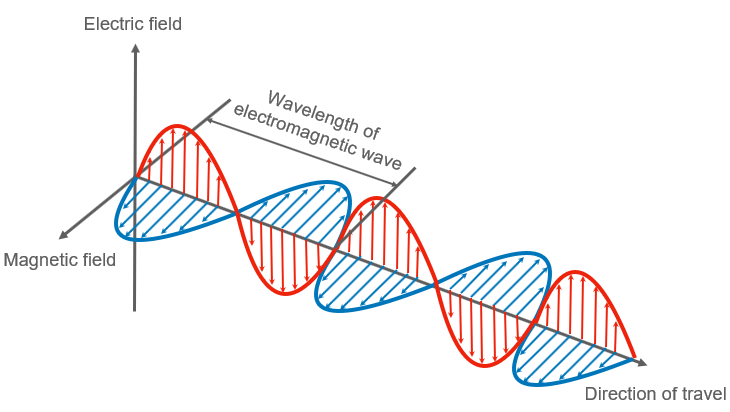 Electromagnetic waves have various characteristics depending on their frequency, which is the number of oscillations per second.

The frequency of electromagnetic waves generated around us in our daily lives can be very different, whether it is from electrical power equipment like power lines or broadcast radio waves like TV and radio. On the other hand, even though the electronic devices are different, the frequency bands they use can be close together.

Difference between EMI and EMS

Difference between EMI and EMC

EMC stands for electromagnetic compatibility which means that EMI effects are reduced and the device is equipped with EMS.

In other words, having EMC means that the electromagnetic waves generated by electronic devices and parts have low EMI impacts on the operation of surrounding devices. These devices have excellent EMS, which allows them to operate normally even when exposed to external or internal electromagnetic waves.

A high level of EMC assurance is required for precision electronic devices such as those used for automatic control.

The instrumentation used in devices directly related to human life, such as automobiles, airplanes, and other forms of transportation and life-support devices, is becoming increasingly electronic and sophisticated. Electromagnetic noise emitted by smart phones, etc. can affect signal cables and communication devices, preventing electronic controls from functioning correctly. To prevent serious accidents, noise countermeasures are being thoroughly implemented alongside multiple safety measures.

In addition, when new equipment is installed in factories, electromagnetic noise may affect existing devices that have insufficient EMC, causing them to malfunction.

When multiple devices with similar frequency bands are used, such as Wi-Fi and Bluetooth, radio wave interference may occur, resulting in slower communication speeds or interrupted communication.

5G, introduced from 2020, is capable of high-speed, high-capacity communications. Since it uses a different frequency band from the conventional 4G and the amount of information is greater, there is a possibility of unexpected radio wave interference with other electronic devices.

3. Health hazards to the human body

Among the electromagnetic waves that are normally generated around us, none of them cause serious damage to human health. X-rays used in hospitals and analysis devices in factories have safety measures in place. In addition, mobile devices such as smartphones are required to comply with radio wave protection guidelines.

However, there are biological effects such as heating and stimulation, and there are health risks due to excessive anxiety about electromagnetic radiation.

EMI countermeasures are essential in order to prevent the effects of electromagnetic noise by increasing the level of EMC. Electromagnetic waves leak from various parts of electrical and electronic devices, as shown below.

The electromagnetic noise that leaks can also be categorized into the following categories depending on how it propagates.

In other words, EMI countermeasures must address not only the sources and transmission paths of conduction noise, but also the spread of radiation noise.

EMI countermeasures take a variety of forms, and the following are some typical examples.

Power cables and communication cables not only serve as transmission paths for noise, but can also generate radiation noise. Therefore, it is essential to take measures based not only on physical protection of the wires but also on electromagnetic wave shielding measures.

EMI shielding as an EMI countermeasure

EMI shielding is a method used to prevent the spread of electromagnetic radiation noise. This section explains the principles, effects, and types of EMI shielding.

Multiple reflection loss is caused by repeated reflection of electromagnetic waves inside the shielding material.

Calculating the effectiveness of EMI shielding

The shielding effect, which is related to the performance of EMI shielding, is calculated by Shelkunoff's formula. The sum of reflection loss, attenuation loss, and multiple reflection loss is the performance of the shielding effect, which is equivalent to the logarithmic value of the ratio of the incident electric field strength Ei to the post-attenuation electric field strength Et. 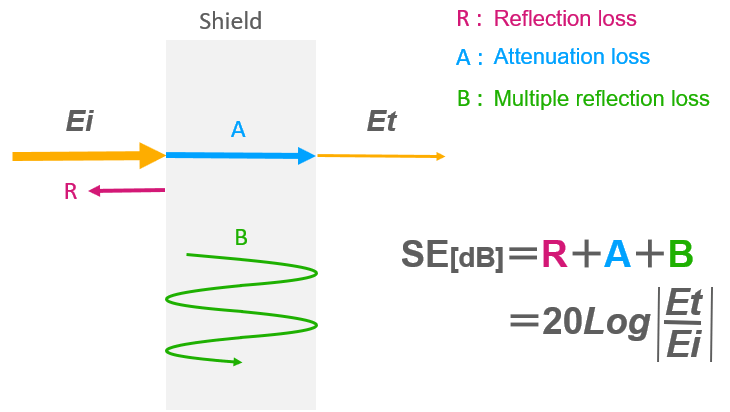 There are several methods for measuring the performance of EMI shielding, including the KEC, DFFC, FS (free space), Advantest, and Bekiscan methods. The appropriate method to select depends on the frequency of the electromagnetic wave you want to measure and the shape of the object.

In order to increase the noise attenuation effect in EMI shielding, it is ideal to surround the noise source with a material that has high conductivity and magnetic permeability without any gaps. A metal plate as a housing material can be expected to have a high EMI shielding effect. In actual device designs, EMI shielding using only a metal housing is difficult due to gaps in the enclosure (electrical discontinuity between the case and the cover), openings for ventilation, protruding cables, and other factors.

For this reason, the following materials are used for EMI shielding depending on the location of use and purpose.

There are various types of EMI shielding, and it is essential to select the right material for the operating environment and to verify the effectiveness of EMI shielding in advance. Taiyo Wire Cloth Co., Ltd. handles a variety of EMI shielding product group such as gaskets, conductive elastomers, soft gaskets, and shield fingers. 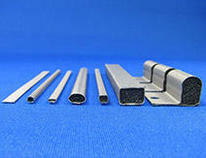